Maintaining the infrastructure in a town of any size is a challenge. With citizens lobbying for a wide variety of improvements to your town's infrastructure, deciding which improvements to prioritize can be difficult. If you are considering upgrading some or all of your traffic signal lights to LED lights, finding out what you can expect to gain from the change is essential before you commit to it. Here are a few of the benefits of upgrading to LED traffic lights.

Visible Even In Direct Sunlight

One of the worst frustrations when driving is trying to see a traffic light that is in direct sunlight. The light from older styles of traffic lights can be completely washed out by direct evening or morning sunlight, and without clear traffic signals, drivers can struggle to maintain the right traffic pattern. Thankfully, LED traffic lights can produce light that is bright enough to stay visible even in direct sunlight. Drivers will be able to see the traffic lights clearly at all times of day, keeping traffic flowing smoothly and reducing the risk of accidents at intersections. Even if you don't plan on calling for the replacement of all of the traffic lights in your town with LED lights, getting funding to upgrade the lights at risky intersections should be easy because of the safety improvements they can make.

Making the switch to LED traffic lights can save towns thousands of dollars per year just from lower electricity costs. The benefits of low energy consumption go beyond these savings, however. They also free up more of the power grid's potential energy to be used by town residents, making town expansion and population growth smooth and as free from power outages as possible. The reduced energy consumption can even benefit small towns with stable populations by reducing pollution and reducing the town's energy needs in preparation for solar system installations.

Traditional incandescent traffic lights use bulbs that need to be replaced frequently. Replacing bulbs requires costly manhours that add to the cost of the traffic light over time. And replacing a bulb doesn't happen without changes to the flow of traffic. As a worker is lifted up to the traffic light or the traffic light is brought down from its pole, traffic will have to be carefully managed to ensure the workers' safety. This process can disrupt commutes and create dissatisfaction among town residents. LED light bulbs can last up to two years in a traffic light, so bulb replacements won't disrupt traffic as frequently. 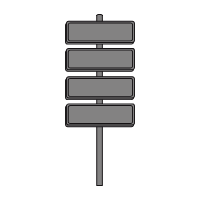 When it really comes down to it, most signs serve one of two purposes. They either give people instructions, or they serve as labels. The speed limit sign on your street is an instructional sign. It tells people how fast they are are allowed to go. Stop signs are also instructional signs, as are signs that things like "don't open this fridge." The sign outside your office door, on the other hand, is a label sign. It designates the office as your space and informs others of that fact. If you find signs as fascinating as we do, we think you're going to like this blog. We discuss all sorts of sign-related topics, from color schemes to how to hang a sign.

The Benefits Of Upgrading To LED Traffic Lights
16 July 2020

Maintaining the infrastructure in a town of any si …

If you own a company and are losing business, you …

Indoor signs can be a common sight in many commerc …

If you are looking for a way to help your business …

Read More
Are You Creating A Home Theater? 3 Movie Room Decorations That Add That Special Touch Of Charm
26 February 2020

A home theater improves the value of your property …